There are two statements that Biblical scholars don't often connect and liberals dismiss as ridiculous.  I believe the Bible is a record of God's interaction with mankind.  And I believe that it can be scientifically/historically true, but not with the normal approaches taken by Christians. I believe that the events of Genesis 2-9 took place on a land that no longer exists, and that explains why these verses have appeared so troubling. Let's look at the verses.

There was no rain on the land upon which God was about to place Adam, and this was a time before farming.

The second verse is Genesis 9:11

"I establish my covenant with you: Never again will all life be cut off by the waters of a flood; never again will there be a flood to destroy the earth.”

I do not like the translator's choice of 'earth' because 'eretz means 'land', not 'planet earth'.  the land that was destroyed, therefore, could have been an area of earth that no longer exists, but actually did long ago, when man's ancestors first appear in the geologic record.  It was the Mediterranean desert.

But let's look at the other flood theories to see if any of them can explain a land with no rain and no rainbow?  The global flood idea has the entire world flooded.  Because rainbows can be seen anywhere on earth's surface today, including the driest area on earth, the Atacama desert, it is difficult to see how there would be no pre-flood rainbows. 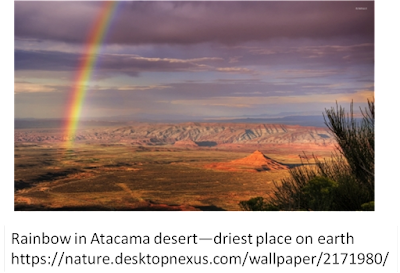 Many global flood advocates say the rainbow was just given special significance, but to me that is like God saying to someone today, I make my covenant with you and I will set my grass upon the ground.  It makes no sense because God didn't do anything as part of the covenant. 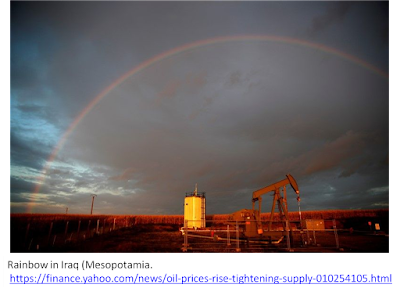 The Mesopotamian flood is popular with many Christians who don't believe in the global flood but want a real flood any way.  The problem is, there is rain in Iraq and rainbows in the sky.  So again, one must effectively have God take something that was already there and give it 'significance', but that isn't very satisfying.  Having God give significance to something already there doesn't show his power to keep his part of the bargain.

The answer to this question lies in the idea that Eden existed in the Mediterranean Basin 5.3 myr ago.  The details can be found in the here, but the world was different back then. The Mediterranean was cut off from the Atlantic ocean and it evaporated to 3 or 4 large lakes. So you will know this large desert is a mainstream idea, see Wiki and Wiki.  The world looked like this:

Click to enlarge. Note that the Taurus mountains are the Mountains of Ararat. The four rivers mentioned in Genesis 2:8-14 are found flowing into the same region of this Mediterranean desert and what looked like a nutty geography to many Biblical scholars, like Ryle and Radday:

The above scenario, recognized by modern geology as real, says that those rivers once were together in the same area. Details here.

Would there have been rain in that 5 km deep, empty basin? Not likely.  First, the Mediterranean waters were mostly gone and the brine lakes remaining probably had salt crusts limiting further evaporation (A. Debenedetti, Marine Geology, 49,1982, p. 94.). There is river water pouring into the basin but, even today it is not enough to keep the Med filled with water. It is truly a small amount of water in the grand scheme of things.

Secondly, the Mediterranean is located in the Horse Latitudes.  Of them, it is written:

"Horse latitudes, subtropical ridges or subtropical highs are the subtropical latitudes between 30 and 35 degrees both north and south where Earth's atmosphere is dominated by the subtropical high, an area of high pressure, which suppresses precipitation and cloud formation, and has variable winds mixed with calm winds." https://en.wikipedia.org/wiki/Horse_latitudes

You can see the 30 deg line along the coast of Egypt.

Thirdly, there is a very sharp rain shadow in all directions. The yellow lines on Mediterranean map above are the mountain ranges that cause a rain shadow.

"A rain shadow is a dry area on the leeward side of a mountainous area (away from the wind). The mountains block the passage of rain-producing weather systems and cast a "shadow" of dryness behind them. Wind and moist air are drawn by the prevailing winds towards the top of the mountains, where it condenses and precipitates before it crosses the top. The air, without much moisture left, advances across the mountains creating a drier side called the "rain shadow"."   https://en.wikipedia.org/wiki/Rain_shadow

In addition as the air flows down into the basin the relative humidity of that air drops, making rain even less likely. Britannica says of the descending air mass:

As the air descended 5 km down into the Mediterranean basin, the relative humidity would seriously drop, more so than anywhere today on the present earth.  Rain would almost be impossible in such a basin.

No rain, no rainbow.