Both Adam and Eve's curses Are Curses for Bigger Brains 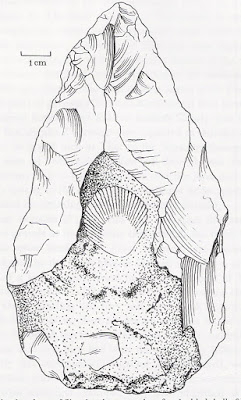 “Even the Lower Palaeolithic hand-axe makers showed interest in fossils. A hand-axe discovered at West Tofts, Norfolk, England has a mollusc shell prominently displayed in the middle of one of its sides. Obviously the maker of this tool had seen the fossil shell that lay embedded in the flint, but, more significantly, he must have worked around the shell in order that, when he had finished flaking the tool, the fossil would be in the centre. This is not the only hand-axe to have such a natural form of in-built decoration. Another, found at Swanscombe, Kent, England, has the fossil of a sea-urchin visible on its surface, and again all the indications are that this was both recognised and valued by the tool-maker. “(29)
Logic and rationality certainly preceded Johnny-come-lately Adam. Moral choices
Conclusion
The late placement of Adam in history, the view preferred by many modern commentators makes an utter mockery of everything said in Genesis 2-3.  Nothing said or proclaimed there is true.  This should not be the view of people who think that the Scripture contains the way of Salvation.  How can such a false book (in their view) really be trusted to tell us the metaphysical truths that we are unable to verify.  If so much stuff that we can verify is false, what guarantee do we have that the theology and metaphysics of Scripture is real?  This is why a historical reading of Genesis is necessary--it is necessary for the trustworthiness of scripture.
References