Finding the Curse in the Human Fossil Record

What if we could find evidence of God's curse on Adam and Eve in the hominid fossil record?  Would that make a difference to your views of Genesis and the Scripture?  My bet is that most people won't change their views.  But I am going to present just that evidence for my claim above.  It is one reason I move Adam and Eve back to 5.3 myr ago.

Obviously this brings objections to my views is the antiquity of Adam and Eve. Both liberals and young-earthers claim they were Neolithic farmers. This can only be said if we ignore what Scripture says about the two curses God placed on Adam and Eve at the Fall. We must understand that pain in childbirth comes from the infant's head being almost too big to fit through the birth canal.  Indeed, my oldest granddaugher's head was too big and a c-section was required. All Homo sapiens females have experienced pain in childbirth for the past 200,000 years.  So, if Eve was a Neolithic woman, whose mother experienced childbirth, why on earth would God curse her with what she already had?

Similarly, Adam's curse of sweat of the brow relates to an enlarged brain. Our brains are energy hungry, using 20 percent of our body's energy.  If it overheats, it will be damaged, so our bodies evolved sweating mechanisms to cool both the body and the brain.   Chimps don't sweat.

"When hominids left the verdant Garden of Eden of the African forest refuges, they began to sweat. Sweating is one of the biggest differences that separates human physiology from that of chimps." ~ Noel Boaz, Eco Homo, (New York: Basic Books, 1997), p. 123

And Dean Falk points out that hominid brains show an increasing level of emissary veins in the foreheads. These veins cool the brain when it overheats.:

"It was beautiful. For the past two million years, the increase in frequencies of emissary foramina kept exact pace with the sharp increase in brain size in Homo. Clearly, the brain and the veins had evolved rapidly and together. I saw that Cabanac's letter was right and that I had unwittingly charted the evolution of a radiator for the brain in my earlier work on emissary foramina. As Anwander had said about my car, the engine can only be as big as the radiator can cool. Apparently, the same is true for heat-sensitive brains." Dean Falk, Braindance,(New York: Henry Holt and Co., 1992), p.159

Sweat of the brow already existed in Neolithic times.  Again, why would God curse a Neolithic Adam with what he already had?  If God were to curse me with weak legs, it would be no big deal. I already have legs that are weak due to damaged nerves. Because of this, we must look for Adam farther back in time. We have already seen Falk talk about the emissary veins increasing in the foreheads of hominids for the past 2 million years, implying that Adam's curse was already in effect.

"The assumption of upright posture and the forward shift of the female genital organs has made it possible for human beings to copulate ventrally, unlike most other animals. A survey in our society has shown that 70 percent of the people follow only this frontal approach in sexual relations, and a cross-cultural survey of nearly 200 societies in different parts of the world has shown that the dorsal approach is not the usual one in any of these societies. There has been some speculation to the effect that the development of the frontal approach has led to a more personal relationship between the sex partners, involving more courtship and sex play than among other primates. Also, uniquely among mammals, human females may experience intense pain during childbirth, another consequence of the assumption of upright posture." ~ Victor Barnouw, An Introduction to Anthropology: Physical Anthropology and Archaeology, 1, (Homewood, Ill: The Dorsey Press, 1982), p. 84

Humans also give birth to more infantile neonates.  Apes and australopithecines double their brain size after birth; humans triple our brains after birth.  Anthropologists say we humans  are born early so we can go through the birth canal, but grow our brains at prenatal rates for a while after our birth.   It is the large head and rotation of the infant in the birth canal which gives rise to pain in childbirth.  Below is a chart from DeSilva and Lesnik which shows that the earliest members of our genus already had the human pattern of  tripling our brain size after birth. 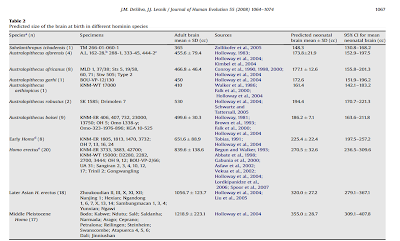 What is unique about humans is that we grow our brains at fetal brain growth rates for a year after birth!  Walker and Shipman write:

"The human evolutionary 'trick' of growing a brain at fetal rates after birth was obviously well in place by 1.6 million years ago. In fact, it seems likely that the change in the pattern of brain growth from apelike to human like must have accompanied the evolution of Homo habilis." ~ Alan Walker and Pat Shipman, The Wisdom of the Bones, (New York: Alfred Knopf, 1996), p. 228

Habilis appears in the fossil record 2.4 myr ago. So we have seen that there is physical, observable evidence of the curses being in existence as far back as 2.4 myr ago.  This means any theory that places Adam and Eve after 2.4 myr can't explain why earlier hominids show evidence of already having the curse. In other words, the curses mean nothing within their views of Scriptural history.

People will object that 2.4 myr is a long way from 5.3 myr year, and their mathematics would be correct, but consider this.  The first fossil of any creature is not the very first being of that kind  of being on earth.  Fossilization is very rare. Indeed, 97% of all species leave no record of their existence in the fossil record.  When a species is rare, it is very unlikely that they will leave a fossil.  Fossils only occur when a species is widespread and subject to many possible chances of one of their number being fossilized.  Because of this paleontological fact, it is a certitude that habilis lived much earlier than 2.4 myr ago.  How much earlier is something we can not say, but, if you look at the fossil records of other species and genera, we find some animals living on earth for millions of years between their fossilization events and leaving no trace of their existence in the interum. For instance, there is a 20 myr gap between the first fossilized loris and the second fossilized loris. There is a 60 myr gap between the first fossilized African turtle and the second, and an 8 myr gap between the first and second fossil elephant. These animals lived on earth for millions of years without leaving a single piece of fossil evidence that they were here.  Thus, to claim as some do that habilis  couldn't have lived earlier than 2.4 myr ago is nonsense.  He had to be widespread by 2.4 myr in order to overcome the odds against a member of his species being fossilized.  Habilis could easily have been on earth 5.3 myr ago

More detail can be found here.
Posted by G.R.Morton at 1:46 PM