As a geophysicist of 47 years experience all around the world, I view some parts of the Bible differently than theologians who don't know much geology. As a geoscientist, I know that the hydrology described is highly unusual--mists, rivers splitting into four big rivers etc.  I have arrived at a professional conclusion, this kind of hydrology can only exist in a flat bottomed basin. Interestingly, there is a massive, US-sized dry basin right next to where the Nile, Euphrates, Pison and Tigris flowed five and a half million years ago. As you read, enlarge the pictures to see for yourselves what I am saying abou them.

For those who might not have heard that this basin was empty the information can be found here, and those who wonder about the Biblical rivers being together, can find that information here.

Many won't like how far back in time this is.  That is too bad because you will miss seeing things from the Bible match up with modern geologic knowledge.
I place Noah's flood in the dry Mediterranean basin because it is the only cataclysmic flood which matches the Biblical description. It filled up in about a year's time, the basin was up to 5 km deep, meaning any mountain less than 5 km high would be covered by this flood, and the fact that the rivers flow into this area at that time, makes this basin a prime geological candidate for being Noah's flood.

As I said, the hydrology described by Scripture only works in a flat bottomed deep basin.  Consider Genesis 2:6:

But there went up a mist from the earth, and watered the whole face of the ground.

Other than areas with hot geysers, I cannot think of anywhere that is watered by mists rising from the ground.  I once owned a ranch and had a small temporary spring.  Water which landed on the adjacent hill, (about 20-30 feet higher than the spring), would seep through the hill's rocks and bubble up in this low area.  It would last about 2 weeks after a rain.  While it didn't have the energy or pressure to spray into the air, water which drops several thousand feet in rocks very well could have had the pressure to form a mist when they spewed into the deep dry, Mediterranean basin.

So how did that happen in Eden?  Below is a cross section of the geology of central Israel.  Note the geologic rocks are dipping to the west, towards the Mediterranean Sea. 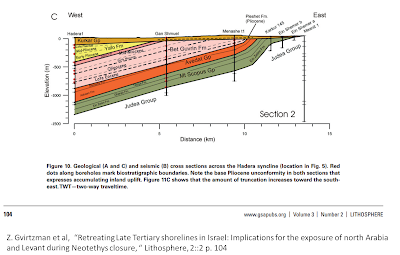 If we extend those dipping sediments to the continental slope, where the continent meets the ocean basin, it would look like this, you can see where the water would be spewing out.:

This geometry of rocks is certain to yield artesian flow at the continental edge.  The situation would be a bit more complicated than what I have shown, but this simplification shows the basic idea.  Artesian wells occur only in valleys, never on top of the mountain.

Egypt's coast at the time is a bit more complicated but I will go step by step.  One thing to know about me is that I was geophysical manager of the Gulf of Mexico for 10 years for an oil company and the knowledge I learned there  about salt movement will come in handy here.  Below is what the coast of Egypt looks like today. 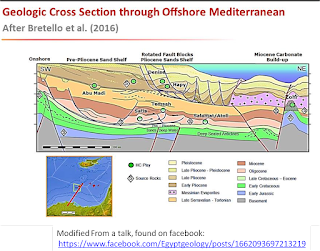 Everything above the orange Abu Madi formation and the purple salt, has been deposited after the Mediterranean flood.  We will restore the geology to approximately what it was like when the basin was dry.  The first thing is to know where the salt was originally.  As you move NE from the left of the cross section you will see the first set of faults (semi-vertical lines cutting through the rocks).  In this area, the faults are cause by salt movement and those faults show where the salt used to be.  See below: 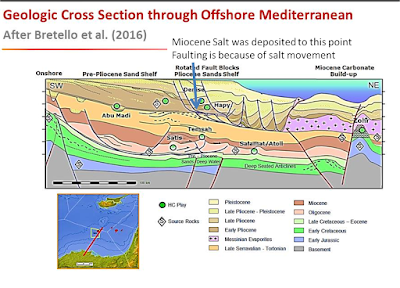 Now we will remove all the post flood sediment and restore the salt to its original position: 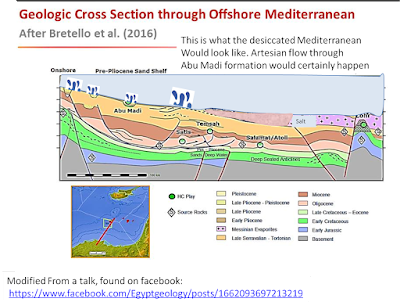 The places I marked the possible artesian locations are channel cuts into the Abu Madi (first 3 from the left) and small thrust faults shown on the cross section in he middle of the section.  Given that the rain falls on Egypt, 5 km higher than this surface was at the time the Mediterranean was a desert, there would have been a lot of pressure to these artesian wells.

I know the Abu Madi formation is capable of artesian flow because it is made of sand and shale. The sands today are filled with natural gas produced by the Egyptian oil industry. a cross section from another place illustrates how faulting could be the source of some artesian flow. 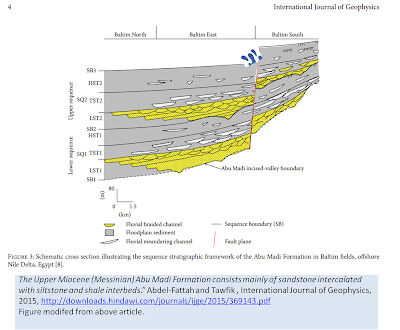 I have shown that it is quite possible for what the Bible says to be true.  Mists would have arisen in this land regardless of whether one accepts this as Eden's location or not.

The second clue that this dry basin marks Eden comes from the fact that this is the only time in geologic history that the Nile, Euphrates, Pison and Tigris flowed into the same region. See the first map in this post or for more detail see here.  Today, the Euphrates, Tigris and the area drained by the Pison(it no longer exists), empty into the Indian Ocean.  The Nile still empties into the Mediterranean. If The Bible is true about these river, then this is the only time and place where one could make a case for a real Eden.  If this location is rejected, then Eden becomes a fantasy as many of our theologians and atheists, have claimed.

"Skinner claimed: 'it is obvious that a real locality answering the description of Eden exists and has existed nowhere on the face of the earth...(T)he whole representation (is) outside the sphere of real geographic knowledge." John C. Munday, Jr., "Eden's Geography Erodes Flood Geology,"Westminster Theological Journal, 58(1996), pp. 123-154,p.128-130

All I can say to Skinner is that there was a time when a locality answering the description of Eden existed.  He just didn't have the requisite geological knowledge.

This event comes at the same time as genetics says the oldest human genes originated. It is the only time genetically we could  have a primal pair of parents.  Isn't that an interesting coincidence? But one will object, only small brained hominids lived at that time.  That is true, but one Homo Sapiens, named Daniel Lyon, lived a full life in New York, having normal intelligence but  the brain size of a two million year old hominid, H. habilis. Daniel Lyon lived a normal life, showing brain size doesn't matter to one who bears the image of God. Furthermore the curses of Eden both involve the brains of Adam and Eve's descendants getting bigger. If they are Neolithic farmers as everyone claims, why curse them with something they already have, namely problems arising from having a big brain?

"And a river went out of Eden to water the garden; and from thence it was parted, and became into four heads."

Rivers don't split right after the spring that starts them.  The only time rivers split into distributaries is when they are on flat land or at their delta, near sea level.  This hydrology is telling us that Eden was at a delta or on extremely flat land.  The bottom of the Mediterranean desert five and a half million years ago would  satisfy that requirement.  It requires a deep flat basin for this to happen.
Well, if we assume that Eden was near where the four rivers poured into the basin, and the Edenic river was sourced by an artesian well, as described above, then below is what I think Eden looked like in diagrammatical form: 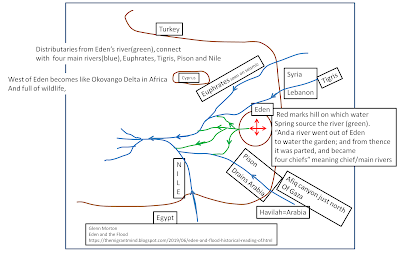 In our world, one river doesn't source four others. So what could this word 'head' mean?  The Hebrew word means 'head', 'chief', or 'principal'.  Its definition says nothing about water, or headwaters.  But some interpret that verse as requiring that this Edenic river be the source of the other rivers.  Now, I had an interesting debate about the word 'heads', but the debate got me thinking and I figured a way to explain this if it does indeed mean headwaters.    Notice that I have one green river flowing out of Eden and its distributaries, empty into the four other rivers.  I am going to suggest that even if you require Eden's rivers to be 'headwaters', a requirement not imposed by the Hebrew but by one's bias, then there is a way to have these rivers as 'heads'. 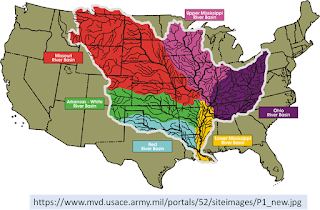 While most people will not like Adam being as far back as I place him and won't accept this theory for that reason alone, I have shown above that the strange hydrology of Eden can only fit a deep basin locale. This, along with the four rivers, the cataclysmic flood lasting about a year, and covering high mountains makes this the only real place in geologic history and geologic time that actually matches the details of both Eden and Noah's flood.  The geology is sound. The question is will you follow where the data leads?