On Biologos, a person was concerned with what the point of God was in the face of evolution. He had become convinced evolution was real, but while reading Francis Collin's book, in spite of Collins constantly saying God was the creator, Collins never connected God with something which influenced the course of evolution. He later admired that he felt that such a God was useless. My guess is it is this 'separate magisteria' idea first proposed by atheist Stephen Jay Gould, and accepted by Collins which causes the discomfort.

""In my view, there is no conflict in being a rigorous scientist and a person who believes in a God who takes a personal interest in each one of us. Science's domain is to explore nature. God's domain is in the spiritual world, a realm not possible to explore with the tools and language of science. It must be examined with the heart, the mind, and the soul-and the mind must find a way to embrace both realms."" Francis Collins, The Language of God, (New York: Free Press, 2006), p.6

This isolates God from anything we modern people think of as real. God is a ghost of whom we can have no evidence. This whole blog is dedicated to opposing that view and showing the God is in charge of both scientific data and theological data. Collin's view makes God a harmless being who can't engage in Nature at all. I don't believe our God is that powerless.

The Intelligent Design movement thinks only in terms of either godless randomness or a designer being the two options.

" Given the existence of a designer ready and willing to do the work, why should we suppose that random mutations and natural selection are responsible for such marvels of engineering as the eye and the wing?" ~ Phillip E. Johnson, "Evoution as Dogma: The Establishment of Naturalism" First Things, October 1990, p. 18

I say, 'why not both design and randomness'? Design by use of randomness. That is what this page will discuss.

Indeed, many young-earthers feel the same way about evolution because of the randomness, feeling that God can't control the randomness.

"Sproul also warns that "if chance exists in any size, shape or form, God cannot exist. The two are mutually exclusive. If chance existed, it would destroy God's sovereignty. If God is not sovereign, he is not God. If he is not God, he simply is not. If chance is, God is not. If God is, chance is not." Hank Hanegraaff, The Face that Demonstrates the Farce of Evolution, (Nashville: Word Publishing co., 1998), p. 61

I am opposed to this view as well. Our God is greater than randomness. Randomness which is subject to rules, or limitations is quite controllable. Christians have taken the wrong approach to randomness. Below is how randomness is God can control random evolution.

We all know that some DNA mutations, maybe lots of them, result in the death of the individual. This means that there are ‘areas of nonviablity’ in what is called the phase space of DNA. The phase space is a massively multidimentional space where the number of axes is the number of base pairs. Each axis has 4 possible locations, for A,G, C, T. This space represented all possibilities for for a DNA molecule f that length. It is just a Euclidian space with several billion dimensions. Below is what such a space looks like for a 3 base pair long DNA. 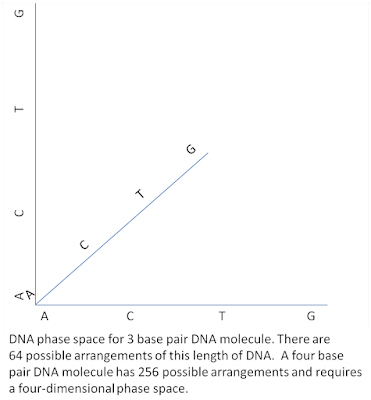 Now, I also read Collin’s book and thought that in that book, God was a useless add on–he served no purpose except as word filler and I agree, Collins provides no mechanism by which God can control evolution and the random mutations that take place. But there is a way to view it where God controls the path. 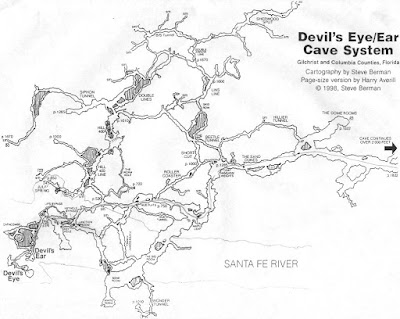 Consider the Hilbert space above and lets draw walls around those nonviable mutations . I think we would end up with something like a cave system shown below, where one can randomly walk in any direction except into the walls. Given enough time, a randomly walk would fill the entire cave system.

A random walk by a dot starting anywhere in the cave will eventually be at every point in the cave. (look it up) Now consider a cloud of DNA patterns which represent a species. As the members randomly mutate they will fill the spaces which are viable sequences of DNA.When they go down different passage ways, they create two different species and it happens randomly but under God's control of the DNA phase space. In this way God controls the randomness and ensures that we would evolve.

Here are three times steps of what I think happens. Let's say life starts at the bottom of this system and let the random walk begin. 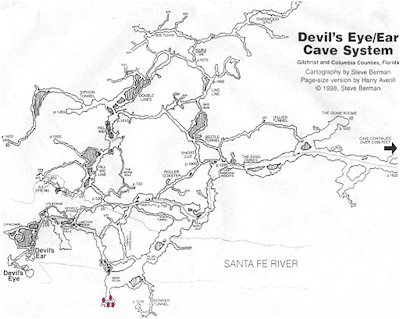 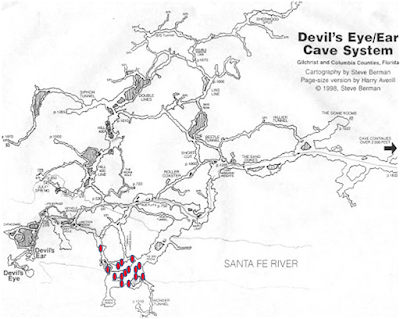 At the time above life has filled a different gallery in the cave system and the original life has gone extinct. The original cavern where life began is empty.

Let's move to one more step in time. 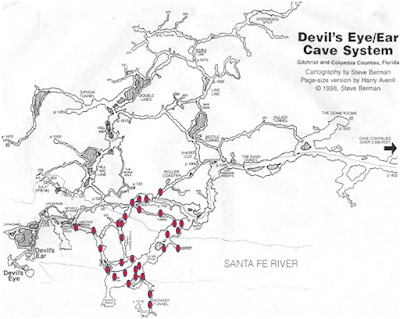 Now we have several galleries filled with different species. I think the reader gets the idea of how I believe God controlled evolution, indeed, made it totally deterministic via random mutations, otherwise known as a random walk. This view makes God a real player in evolution and not a useless mantra we give lip service to every four pages in our book.

In the above way, God can control what happens in random evolution and ensure that eventually we would evolve. It is design, but not of the kind the ID movement prefers. .
Posted by G.R.Morton at 2:00 PM