Did Noah's Flood Kill All Humans except his family?

Did Noah's Flood Kill All Humans except his family?

Let's be real here.  This story is an embarrassment to liberal Christians and held to dearly by young-earth people, who are also an embarrassment to 'scientifically minded' Christians.  The young-earthers,  I believe correctly,  think the Bible stories are true, or at least true in large part. Proclaiming the Bible to be myth undermines its credibility as a book telling us the true path to salvation. There are two great divides we must cross between these two groups. The first is the extent of the flood. Was it local or was it global.  The second is, was it anthropologically universal, that is, did it kill all humans save Noah's family?
Let's start with the verses I believe are wrongly translated, or translated with the translator's bias.  The issue revolves around the meaning of 'eretz', My favorite author as a young Christian said:

" According to Young's Analytical Concordance, the Hebrew word is translated Country 140 times, Ground 96 times, and Earth and Land frequently. It is also rendered Field once and by several other words in a very small number of instances. Assuming that Young's list is exhaustive, actual count shows that the word is translated Earth about 677 times and translated Land 1458 times. Moreover, of the 677 occurrences in at least 100 instances the word may be equally if not more appropriately, rendered Land rather than Earth." ~ Arthur C. Custance, The Extent of the Flood, Doorway Papers, 41, (Ottawa: Privately Published, 1958), p. 3

and every thing that is in the earth shall die

The modern mind thinks of planet earth when we see that word, but the Hebrews understood the word to mean land/country, not a ball in space.  While I know the evidence is against the concept that they believed in a flat earth with domed sky, I don't think they thought in our terms when they saw 'eretz'.

Every other use of the word "earth" in the flood passage could equally be translated as land.  I will say this.  One can't get the extent of the flood from Scripture alone. Land could mean all the land in God's creation which, today, we would say would be a global flood.  But if it is to be translated as land, as I believe, then the flood could be local. And this brings us to the mountain and universality problem.

So how about universality?  There are only two ways one can have an anthropologically universal flood.  First, have a global flood. As a geophysicist, I spent 15 years in my 20s and early 30s struggling to fit what I was seeing in geology into a one year global flood. I will guarantee anyone that the geologic data won't fit that scenario. But, all is not lost for those of us who wish to have a historical Bible. The second way to have an anthropologically universal flood is to have the flood at the start of humanity, when they were in a localized place.  This is the approach I take.

So, our criteria require that we find a local flood capable of covering high mountains, when humans first appear on earth.  I guess we need to define human here.  I define humans as anyone who carries the image of God. That means they have a human-like consciousness. What they look like is of no concern, nor is appearance an indication of whether they lack or have the image. Brain size is not necessarily a requirement to carry the image of God.  My wife had a Downs uncle who had a very small cranium, yet he was fully an image carrier. No, he couldn't do physics, but he did love the Lord.   I know this isn't an objective criterion and is not easily applicable to fossil man, but there are some things that are indicative of Adam and Eve being extremely old. Among others, the evidence can be found  here here

Amazingly there is a flood which is capable of fulfilling all our criteria. It is the Mediterranean infilling which happened 5.3 myr ago. It was a cataclysmic flood.  The Mediterranean had dried out and become largely a desert but with lush areas where rivers flowed into it. Interestingly,one of the suggested origins of the word 'Eden' is the Akkadian word for desert  Rivers like the Nile, the Pison, the Tigris and Euphrates. The basin was as deep as 5 km, When it filled in, the waters covered mountains as high as 5 km. That is 15,000 feet.  If that doesn't qualify as a  tall mountain, then I don't know what would qualify.

Why do I believe this is Noah's flood?

1. It is the only flood in earth history that matches the Biblical description exactly.

2. Only at this time did the rivers of Eden flow into the same place.  It is amazing to me that the Biblical description of Eden is an exact match for the geography of 5.3 myr ago in the eastern Mediterranean region.. The Tigris and Euphrates, the Gihon which encompasses Cush can only be the Nile, and the Pison which flowed out of Havilah which the Bible places in Arabia, all were in Eden. Their positions are marked on the PBS map below showing the locations I believe they entered the basin in based upon interpretations of 3D seismic data shown in the literature. That a river was at each of these locations is certain. One could of course squabble about the name. They do match what Scripture says about Eden. 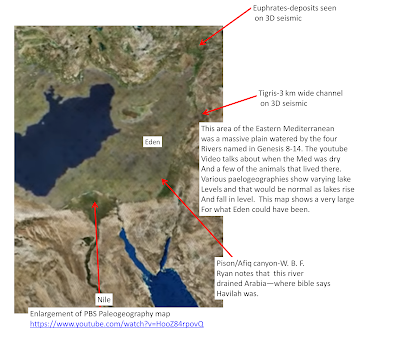 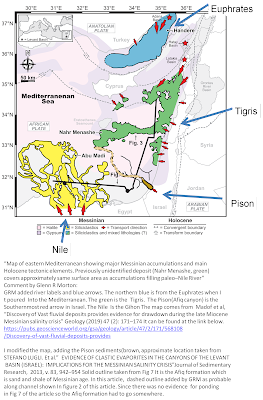 Below is an enlargement of this map showing what would be a huge area on the desert floor lushly watered by four different rivers. The area from the lake to the Levant coast is absolutely huge, but, as I said, would have been watered by 4 big rivers  each of whom was mentioned in Scripture. The sediment from these four rivers would have created a land of intersecting deltas and built up a land gently sloping to the brine lake. It would have looked much like southern Louisiana only larger, and as with the Okovango delta in the Kalahari desert, much wildlife would have flourished there (see PBS video at end) or see my list in this Biologos post. 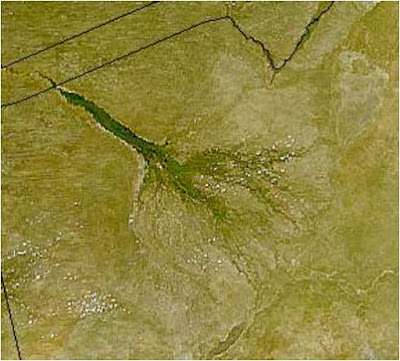 3. It was just at the time when the earliest hominids appeared on earth. The earliest known as of this writing is A. kadabba  dated to 5.6 myr. A flood at this time, when humans are brand new can be anthropologically universal and the theology of the young-earthers can be correct. If all the humans are confined to that basin, then when the flood happened, they all died. One doesn't have to reject Noah's flood as myth if we place the flood in the Mediterranean basin at this time.

4. One couldn't easily walk out of this area so an ark was necessary.  The Mediterranean basin is huge, an equal distance from one end to the other  the same as crossing the USA.  As air is pushed out of the basin, it would have created weird air fronts at the tops of the basin as the evicted air pushed outward away from the basin, and I feel certain it would have rained all around the rim of the basin, again making it difficult for someone to walk to safety.

5. It covered high mountains. This is the only local flood ever proposed that could cover 15,000 foot high mountains. Gravity models of the basin strongly suggest it was that deep or even deeper in parts. Note that in the model below they place the original  Messinian surface, the red line in both models,  at 7 km below sea level. Even after 2 km of salt is deposited, the depth of the basin would be more than 5 km below sea level. 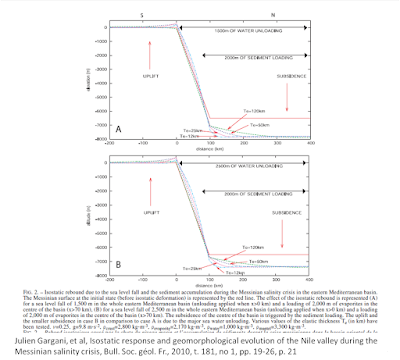 6. Modeling of fluid flow shows that, depending upon how large the breach in the Gibraltar dam was, it would fill in between 8 months and 2 years.

7. An object floating on the waters could have easily landed in southern Turkey, which the Bible calls the mountains of Ararat!. The Bible does use the plural for mountains, not the singular, so the Bible doesn't say mount Ararat.

8. Finally, I know of no other flooding event in geologic history that can satisfy the above check list.

There are several interesting short videos of what the infilling of the Mediterranean would look like. Come back  after watching. There is a bit more to say. video 1 This second video also models the Black Sea but it has been proven that the Black Sea was never dry. video 2 .  Below is another fluid flow model showing the velocity of the water.  The top of the scale is near 223 mph (100 meters/second)! 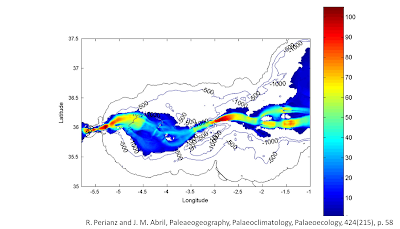 The second video has a much larger influx of water and by day 14 had started filling the eastern Mediterranean.  Smaller openings in another fluid flow simulation says that the western basin would not start filling until day 400, but it would take 200 days to fill the rest of the basin. As noted above this if close to the 150 days of waters prevailing.

If the Biblical account is from Noah's viewpoint, in this latter modeling, he would not know that the Gibraltar dam had breached for a long time after the catastrophe was certain.  He would enter his boat (not the size of young-earth views), and stayed there until he landed in Turkey.

This flood matches exactly what the Bible says happened. The only impediment to its acceptance is resistance to the idea that Adam is old, resistance to evolution, and belief that the Scriptures are merely myth. I guess the question is, do you want the Bible to be historically true or not? Given the state of our geological knowledge it certainly can be real. For my part, I believe it was real. My faith is in Jesus Christ alone, but my belief that this is real is based upon real scientific data that matches the Bible's description of Eden.

postscript. The PBS video is excellent and will explain much about this event. It is 11 min long but it is a good 11 min.  It can be found here.