Contrary to claims of many modern Holocene denying climate hysteriacs, the 1970s did have a number of writers who beleived that the world was going to cool down. Among these were Stephen Schneider, the founder of the Climate Project at the National Center for Atmospheric Research. He wrote:

" I have cited many examples of recent climatic variability and repeated the warnings of several well-known climatologists that a cooling trend has set in-perhaps one akin to the Little Ice Age-and that climatic variability, which is the bane of reliable food production, can be expected to increase along with the cooling." Stephen Schneider, The Genesis Strategy, (New York: Plenum Press, 1976), p. 90

Notice that Schneider says climate variability is caused by the cooling. Schneider eventually became a global warming alarmist but back in the 1970s when he wrote the above, he also wrote:

"The Dramatic importance of climatic changes to the world's future has been dangerously underestimated by many, often because we have been lulled by modern technology into thinking we have conquered nature. But this well-written book points out in clear language that the climatic threat could be as awesome as any we might face and that massive world-wide actions to hedge against that threat deserve immediate consideration. At a minimum, public awareness of the possibilities must commence, and Lowell Ponte's provacative work is a good place to start." Book jacket endorsement of Lowell Ponte's, The Cooling, (Englewood Cliffs: Prentice-Hall, 1976)

In countering the claim that a heat wave disproved global cooling, Ponte relates:

"But as Dr. Lamb pointed out calmly, such heat waves have accompanied every past global cooling and are to be expected. A high-pressure zone blocked warm air and chilled the North Atlantic. Now another hihg-pressure zone was blocking cold air and bringing extremes of heat into Europe. But such blocks were both symptoms of a cooling climate. Such cooling, he said, 'means more volatile weather. It will be more hot, more cold, more wet and more dry, just as it was in the seventeenth century.'" Lowell Ponte, The Cooling, (Englewood Cliffs: Prentice-Hall, 1976), p. 40

Back then global cooling explained everything, hot, cold, wet or dry. Cooling was everything.

But today things are soooo different. we are so much better. Today global warming explains cold, hot, wet and dry.

The alarmists have just changed horses, not the need for alarm.

Here is the concluding statement from a climate blog advocating global warming alarmism.

According to the scientists at NOAA, the extreme weather of 2010 may very well be the “new normal.” Hotter, colder, wetter, drier. And way beyond inconvenient.http://trackerblog.trackernews.net/2010/07/27/hot-cold-wet-dry-when-weather-becomes-climate/

Yep now instead of global cooling causing every kind of weather imaginable it is now global warming. As Ecclesiastes says, there is nothing new under the sun.

Even academic literature is littered with the idea that global warming is a universal causation of everything, hot cold, wet and dry.

" Our
results indicate that ﬁne-scale snow albedo effects inﬂuence the
response of both hot and cold events and that peak increases in
extreme hot events are ampliﬁed by surface moisture feedbacks.
Likewise,we ﬁnd that extreme precipitation is enhanced on the lee
side of rain shadows and over coastal areas dominated by convective precipitation. We project substantial, spatially heterogeneous
increases in both hot and wet events over the contiguous United
States by the end of the next century, suggesting that consideration of ﬁne-scale processes is critical for accurate assessment of
local- and regional-scale vulnerability to climate change"
Noah S. Diffenbaug, et al, "Fine-scale processes regulate the response
of extreme events to global climate change," PNAS, 102(2005):p. 15744

That article was edited by Stephen Schneider.

"Conservation group WWF has blamed climate change for the coldest August in Sydney for more than 60 years.
The freezing temperatures are proof of the urgent need to cut carbon pollution, according to WWF development and sustainability program manager Paul Toni."
"We can expect more extremes in climate," Mr Toni said.

"The severe coldness this winter can be called an extreme weather event. The direct reason for this is the atmospheric circulation anomaly. The main reason is the emergence of new EI Nino Phenomenon caused by global warming." "Weather expert: Extreme cold weather in N China caused by global warming" January 7, 2010
http://www.china.org.cn/environment/2010-01/07/content_19195436.htm

As if no El Nino's ever occurred before the 1900s. What a laugh.

"'Even though this is quite a cold winter by recent standards it is still perfectly consistent with predictions for global warming,' said Dr Myles Allen, head of the Climate Dynamics group at Department of Physics, University of Oxford." Richard Alleyne"Snow is consistent with global warming, say scientists" The Telegraph Jan 23, 2011 http://www.telegraph.co.uk/topics/weather/4436934/Snow-is-consistent-with-global-warming-say-scientists.html

The article this is from has the following as the teaser,

"Britain may be in the grip of the coldest winter for 30 years and grappling with up to a foot of snow in some places but the extreme weather is entirely consistent with global warming, claim scientists." Richard Alleyne"Snow is consistent with global warming, say scientists" The Telegraph Jan 23, 2011http://www.telegraph.co.uk/topics/weather/4436934/Snow-is-consistent-with-global-warming-say-scientists.html

But cold as well as hot as well as wet as well as dry can be due to global cooling or global warming, whatever explanation is needed.
Posted by G.R.Morton at 9:17 AM No comments:

Where is the rejoicing? 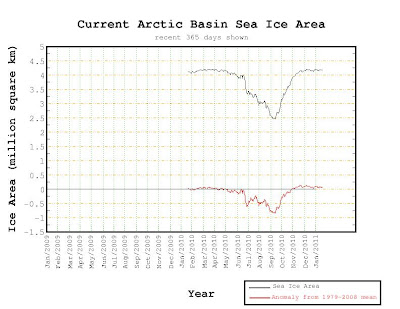 Where is the rejoicing??? We have heard years of whines and complaints about the Arctic ice melting and (wipe my eyes free of the tears) how this is killing the (wipe them again, sob, sniff) pretty polar bears.

But when the Arctic Ice is, as it is now, ABOVE the long term average, there is SILENCE, not cheering from those most vocal about saving the (gotta wipe a few more tears here, sigh, wait a minute while I compose myself).....polar bear who can't fend for himself if we don't (loud crying here) stop using fossil fuels. Today the Arctic ice is above the long term (1979-2008) average. Where is the cheering?

Could it be that the lack of cheering is because polar bears are really only a pawn in their political gamesmanship? The polar bear isn't what they are worried about, it is political control.

Below is the current ice extent anomaly. Pardon me while I go off an cry because of the lack of truthfulness among the global warming hysteriacs

Picture from :http://arctic.atmos.uiuc.edu/cryosphere/IMAGES/recent365.anom.region.1.html
Posted by G.R.Morton at 7:10 PM No comments:

The Beat of Water Vapor

I have been so busy with a tech start up that I run that this blog has had to suffer. This is going to be short but the first picture attached shows the total precipitable water vapor in the atmosphere over time. The source is referenced in the first picture. 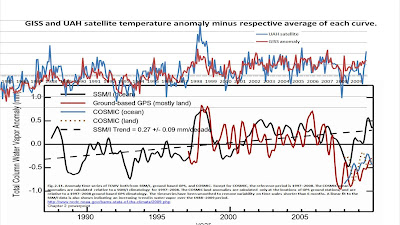 The picture below adds one more curve to the display, the CO2 curve You can clearly see that the satellite temperature marches to the beat of water vapor and doesn't match the CO2 curve. CO2 doesn't go up and down with the temperature. It is water vapor that drives the climate, not CO2. 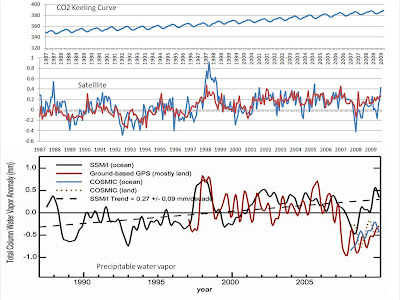 Climate hysteriacs are simply ignoring data like this.
Posted by G.R.Morton at 8:17 PM No comments: